There is no light without shadow, no truth without sacrifice, and no way to keep us all from harm. 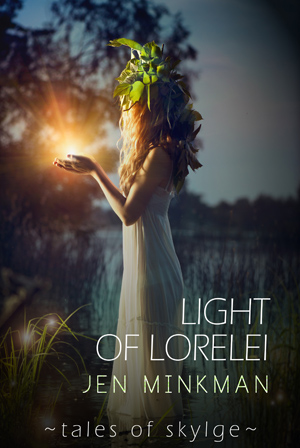 Aska wants more out of life than being a temple girl in the St. Brandan Convent of Brandaris. Her life-long service to the Baeles-Weards is the only reason she wasn’t killed immediately after birth – she is atoning for the sins of her parents. Her Anglian mother and Skylger father were never supposed to love each other and have children, and Aska is reminded of her low status and illegitimacy by her fellow temple girls every day.

But then she meets Tjalling, a young, mysterious, and charming Skylger fisherman who doesn’t seem to care that he is not supposed to befriend her. Soon after they meet, the island falls prey to the largest Siren attack in the history of Skylge and Aska is beginning to doubt the wisdom of the priests. If the Light in the Tower really keeps the people from harm, why are the Shriekers taking more and more lives each day?

Adding to her inner turmoil is a secret meeting with Royce and Enna, who want to recruit her into their resistance movement, an unexpected confession from her best friend Melinda, and Aska’s realization that she likes Tjalling a bit too much for her own good.

Soon, she is going down a road there is no turning back from, forcing her to make choices that shake the foundations of her world.
For Aska, there is only one true choice – to bring the truth to light.


This book is part of a series. I will only work with translators who have also worked on translating the first book in the series into their native language so my marketing efforts will benefit the translator as much as possible.


The other temple girls can afford to be generous. They only have to serve in this convent for five years maximum. Some of them chose to walk this path after finishing school, so they’d be guaranteed of St. Brandan’s favor, while others were sent here as punishment for their wayward ways. The sooner they learn to behave, the faster they’ll get out.

I, on the other hand, am never getting out. I’m in this for life. I have no home to go back to, after all. In here, I get fed, clothed, shod, and educated, and in the cold winters raging over our island I can hole up in my room and turn up the radiator, unlike the traditional Skylgers deprived of electricity.

But I’m not free.

I will never marry anyone. I’m supposed to dedicate my life to prayer, guarding the Fire, and learning hymns to scare mermaids away – and right now, that life seems to stretch out endlessly before me. Such a life is no life at all.